Does having certain values enhance your well-being? Or does the relationship between values and well-being depend on the country where you live and your social network? The doctoral thesis by Florencia Sortheix examines these questions in four contexts: across 40,000 citizens in 25 European countries in 2006; between six hundred Argentine, Bulgarian, and Finnish university students; in a Finnish rural community in 1993 and 2007; and a representative sample of six hundred Finnish young adults from the Finnish Educational Transitions (FinEdu) project. 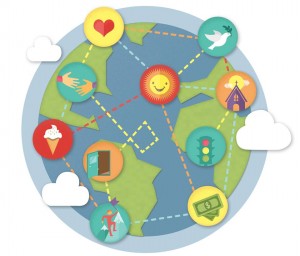 Personal values represent what is desirable and most important in our lives and serve as guidelines, or principles in life. Subjective well-being concerns satisfaction with one’s life and the presence of pleasant rather than unpleasant emotions.

Results from Study I of this article-based doctoral thesis show that different values are related to well-being in European countries that vary in their level of socio-economic development. In poorer countries of Europe, such as Bulgaria, individuals who value achievement are more satisfied. This is not the case in wealthier countries, such as Finland, where those who value universalism (e.g., social justice, protection of environment, equality) are more satisfied.  The results also show universal positive motivations for well-being: in all countries valuing benevolence (e.g., caring for the well-being of close others) and hedonism (e.g., enjoying life) is related to higher well-being, whereas security (e.g., personal and national security) and power (e.g., wealth, dominance) are associated with lower well-being.

Studies II and III showed that within the university context, business and education students who have a value profile similar to other students have higher well-being. Having positive interpersonal relationships partially mediates this association. These findings were mirrored in the community sample, as people whose values were similar to the values of other members of their community had fewer psychological stress symptoms.

In sum, the doctoral thesis demonstrates that the relationship between values and well-being is dependent on the broader social context in which individuals find themselves. Specifically, the relationship between individuals’ values and well-being is influenced by country-level characteristics, by the social groups to which they belong, as well as by organizational and developmental situations.

Florencia Sortheix will defend her doctoral dissertation in the Faculty of Social Sciences, University of Helsinki, on 9 April 2014 at 12:00.

Find us on social media